Spring is here! And so are the ants…. Hibernating ants from last season will soon awaken and make themselves seen in homes. 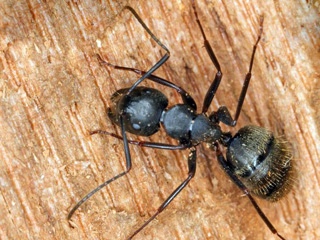 About 600 species of ants reside in the United States, but none is perhaps more infamous than the large black carpenter ant (Camponotus pennsylvanicus). In its natural habitat, this ant helps decompose decaying trees, but, once carpenter ants get inside buildings, they become annoying and destructive pests.

Carpenter Ants found in Massachusetts are black, shiny, and relatively large, ranging in size from one-quarter to three-quarters of an inch. Fertile males and females, which emerge in late spring or early summer to mate, have wings.

Ants are social insects, occupying colonies that overwinter in a nest within a building or tree. Each colony has a queen, who produces eggs, and workers who tend the young, build and guard the nest, and forage for food. During the late spring and early summer, large numbers of winged males and females emerge from the nest to mate. The males then die, but mated females lose their wings and begin searching for new nest sites.

After finding and excavating a new nest site, the female seals herself into a small cavity and lays about 15 to 20 eggs. She tends the eggs, which develop into legless larvae. They pupate, and adult ants emerge from the tan pupa cocoons. When the new adults are old enough to care for the next brood, the queen produces more eggs, even though she has mated only once

Carpenter ants mainly feed on honeydew secreted by plant-dwelling insects such as aphids. They also feed on dead insects, the juices of plants and fruit, meat, fat, and sweets. The workers eat the food, carry it back to the nest, and feed other ants. Workers can live up to six months without food. If a lack of food and water stresses the colony, the queen and a few workers can survive for long periods by resorting to cannibalism.

A study of carpenter ant nests in the Northeast determined that 75 percent of nests occupy dead trees, and they play an important role in decomposition. Carpenter ants are usually noticed in the spring or summer when they seek mates or forage for food. Tree branches that brush against the building, clotheslines, woodpiles, or cable, phone, or electric wires can provide a route for the ants to enter and establish a new nest.

In homes, carpenter ants may nest without attacking structural wood. They can use voids in walls, or voids around windows and doors. When they do enter the wood structure of a house or building, it’s usually because dampness or rot has made the wood easy to excavate.

We can blame most ant-related structural damage in the Northeast on carpenter ants. Unlike termites, carpenter ants do not eat wood but instead tunnel into it to construct their nests. While slow to cause much harm, they can do major damage without control.