Ticks are tiny, hitchhiking pests transported into your yard or public space by various animals; they do not fly or jump. Ticks can bite and spread disease; they feed on the blood of mammals, birds and reptiles and look to attach themselves to a host by direct contact.  Areas with greatest tick population in and around your property include shaded, brushy, wooded or grassy areas.

The three most common types of ticks on Cape Cod and in Southeastern Massachusetts
include: 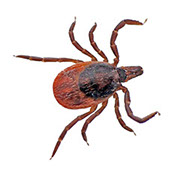 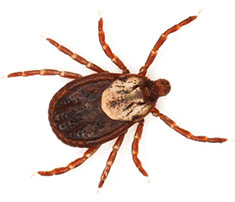 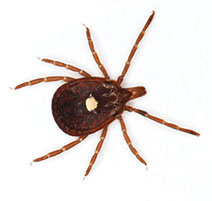 The effects of Lyme Disease can be debilitating; you’ve either had it or know someone that has. Early signs of Lyme Disease include rash (Erythema Migraines), fever, chills, fatigue and muscle and joint pain.  Prolonged signs include severe headaches, severe joint pain, facial palsy, irregular heart beat (Lyme Carditis), inflammation of the brain and spinal cord, nerve pain and short term memory loss.  Barnstable, Bristol and Plymouth counties have some of the highest rates of Lyme Disease in Massachusetts, the CDC estimates that only 10 percent of cases of Lyme Disease are actually reported.

In addition to Lyme, the CDC confirmed cases of Powassan in Massachusetts, a potentially deadly virus that can infect the nervous system causing encephalitis and meningitis.  In 2016, Massachusetts had the fourth highest rate of Powassan in the country.   Approximately half of survivors experience permanent neurological symptoms.  Other tick borne diseases on Cape Cod and in Southeastern Massachusetts include Babesiosis, Tulameria, Anaplasmosis and Rocky Mountain Spotted Fever.

The culprit behind most tick borne illness on Cape Cod and in Southeastern Massachusetts including Lyme Disease, Powassan, Babesiosis and Anaplasmosis is the blacklegged tick, commonly known as the deer tick.

In January 2015, The Massachusetts Executive Office of Health and Human Services confirmed cases of Rocky Mountain Spotted Fever, a potentially deadly disease, and Tularemia; both spread by the bite of an infected dog tick.  While incidents are rare, the highest rates of Rocky Mountain Spotted Fever were reported from Southeastern Massachusetts, Cape Cod and Martha’s Vineyard.