MICE AND RATS ON CAPE COD AND SOUTHEASTERN MASSACHUSETTS

New England is home to approximately 10 different types of Mice, the two most likely to infest homes on Cape Cod and Southeastern Massachusetts are the House Mouse and Deer Mouse.  Voles or Meadow Mice are prolific breeders but prefer to remain in outdoor habitats.

Rats are hardy, opportunistic rodents found everywhere in the world except Antarctica. The most common rat species invading Cape Cod and Southeastern Massachusetts is the Norway Rat.

In addition to being nuisance pests, mice and rats are carriers of many diseases including Hantavirus, Lymphocytic Choriomeningitis (LCM), Plague, Tularemia, Hemorrhagic Fever, Leptospirosis, Rat Bite Fever and Salmonellosis. 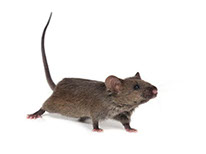 The House Mouse typically lives outside during warmer months and begins to seek shelter in the fall and winter when temperatures begin to drop.  With their ability to slip through the smallest of cracks and holes (approximately ¼”), the House Mouse is recognized for its proficiency infesting homes. Scientists have called the House Mouse the “second most successful mammal on earth” due to its incredible adaptability.

The House Mouse ranges from light brown to black in color, adults grow to
2 ½ - 3 ¾” long.  The House Mouse gestation period is 18-21 days and reaches sexual maturity at 6 – 10 weeks.  Females average 6 – 10 litters in their lifetime with an average litter of 5-6 pups.  Average lifespan of the House Mouse in ideal conditions is up to 2 years.  In the proper environment and gone untreated, a House Mouse population can explode.

Deer Mice get their name from the similarity of coloration to the white-tailed deer, with brown back fur and a white underbelly.  The Deer Mouse is slightly larger than the House Mouse, averaging 3 – 4” in length.
‍
Deer Mice also possess the ability to fit through the smallest of cracks and holes when seeking shelter in your home. Deer Mice breed throughout the year, with highest numbers in warmer months.  Gestation period for the Deer Mouse is approximately 24 days, sexual maturity reached in 7 – 8 weeks. In thy right conditions, average lifespan for a Deer Mouse is up to 2 years. Like the House Mouse, Deer Mouse populations can grow quickly if left untreated.

The Deer Mouse is the primary species involved in the transmission of Hantavirus Pulmonary Syndrome (HPS) to humans.

Norway Rats are primarily ground dwelling creatures, constructing their homes in underground burrows. Norway Rats will nest indoors if conditions permit.  Norway Rats are both feral and commensal, living independent of people or in well-established human environments. However, Norway Rats typically live among humans where food, water and shelter are plentiful.

The Norway Rat is much larger than a House Mouse or Deer Mouse, averaging 7-8” in body length with a 6-8” tail.   Norway Rats are typically grayish-brown in color but can vary from pure gray to reddish-brown.  The gestation period is approximately 3 weeks; sexual maturity is reached at 3 months.  Females produce an average of 4-7 litters per year with 8-12 pups per litter, average life expectancy of a Norway Rat is 1 year in the wild.  Home range is approximately 25 – 100 feet from the nest.  If you’re seeing signs of Norway Rats near your home, their nest is most likely nearby.