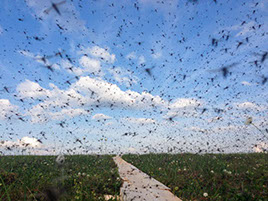 MOSQUITOES ON CAPE COD AND IN SOUTHEASTERN MASSACHUSETTS

Massachusetts is home to approximately 50 different species of mosquitoes, the existence of a particular type is dependent on available habitat or wetland.  Mosquitoes require water to breed but not much, something as small as a child’s sand bucket can provide a home for thousands of mosquito larvae.  Most mosquitoes lay their eggs directly in water, larvae and pupae cannot survive without it.  Breeding areas can be natural like ponds and marshes or man-made like gutters and flower pots that collect water around your property.  Many mosquitoes common to Cape Cod and Southeastern Massachusetts survive through the winter as dormant eggs in moist areas surrounding temporary pools.  Those mosquitoes hatch when temperatures rise and areas experience increased tides, rains, irrigation or rising rivers.

Male mosquitoes feed exclusively on plant nectar while females feed on blood and nectar.  Only females bite and need blood in order to lay their eggs.  Most mosquitoes are active at night or at dusk and dawn, typically resting during the day in sheltered places such as under the leaves of bushes, trees and shrubs.

In addition to being a back yard nuisance, mosquitoes are the deadliest animal on the planet; responsible for over one million deaths annually.  Two of the most prevalent mosquito borne illnesses in Massachusetts are Eastern Equine Encephalitis and West Nile Virus.

Eastern Equine Encephalitis (EEE) is a rare, but serious disease transmitted through the bite of an infected mosquito.  Symptoms can include stiff neck, headache, fever and weakness.  The most serious complication is swelling of the brain (encephalitis).

West Nile Virus (WNV) is a rare disease transmitted through the bite of an infected mosquito; most infected people will have no symptoms.  Symptoms may include fever, headache, body aches, nausea and a skin rash on chest, stomach or back.  A very small percentage develop severe illness such as Encephalitis or Meningitis, persons over the age of 50 are at higher risk.

Other travel based mosquito borne illnesses to be aware of include Malaria, Zika, Dengue, Yellow Fever and Chikungunya.  The Aedes aegypti mosquito is the main type of mosquito that carries these diseases.  Originating in Africa, the Aedes aegypti is now found in tropical and subtropical regions throughout the world.  The CDC reports many areas in the United States with types  of mosquitoes that can become infected with and spread Zika, Chikungunya and Dengue.